Are Dogs Omnivores or Carnivores?

Are dogs carnivores? Well, the short answer is no. Continue reading to find out more.

Does your dog prefer to eat meat or vegetables? While the answer may seem obvious, it is a question that has been hotly debated by animal experts for years.

Dogs are direct descendants of wolves, so naturally, we assume that dogs are carnivores. However, dogs have gradually adapted to living among humans for years now, and as a result, they have transitioned into becoming omnivores.

Because I’ve been a dog owner pretty much most of my life, I’ve been fascinated to see the different points of view of animal experts, scientists, and veterinarians.

In this blog post, we will explore the differences between omnivores and carnivores and explain why dogs are now considered omnivores.

Omnivores are animals that can eat both meat and plants.

Humans are considered omnivores for example because we can get a variety of nutrients and minerals from both vegetables as well as meat.

Because of this, we’ve slowly transitioned dogs to accept our diets.

But, throughout the years, there’s been debate over whether dogs are actually carnivores. Many simply believe that because dogs are direct descendants of wolves, that they must be carnivores.

And while dogs do have certain characteristics and similarities with wolves, they are able to consume a different diet from their ancestors.

How Are Dogs Carnivores?

Over 15,000 years ago, humans began domesticating dogs and presented them with new opportunities.

While cats have also been domesticated by humans, most experts agree they remain carnivores that need meat to fully thrive.

So how is it that cats, who are domesticated by humans, are obligate carnivores, yet dogs aren’t?

Simply, dogs have an adaptive metabolism. And this metabolism is why they can consume the special diets that are given by humans. Over the years, dogs have gradually transitioned to become omnivores and benefit the most out of domestication.

There is clear evidence to suggest that dogs are omnivores compared to other carnivores.

You can easily analyze an animal’s diet by looking at its digestive system. The gastrointestinal system plays a vital role in the digestion of food.

For example, plant foods contain multiple complicated materials, like starches or cellulose. These can be particularly difficult for a digestive system to process.

So an animal can effectively process the nutrients and materials of plants, they need a specific digestive system. For example, animals that consume grass need to have complex hindguts so they can process them.

Enzymes are proteins that speed up chemical reactions. For example, Amylase is a type of enzyme that helps break down starches.

Humans as well as omnivores have this enzyme in their saliva. So when they chew on plants, the saliva begins to break down the starch.

While dogs do not have this essential enzyme in their drool, they do have it in their pancreas. Unlike carnivores, this enables them to digest starch in their digestive system.

Unlike plants, meat is easier for the digestive system to process. And because of their shorter intestinal tracts, carnivores, with their simpler digestive systems, can process meat faster than omnivores.

There is little difference between a dog’s intestine length and a wolves. However, compared to cats, who are obligate carnivores, their small intestine occupies 8% more volume. Because of this, dogs are better equipped to digest plants.

But, notably, this slight adaptation allows dogs to consume foods with high amounts of starch, unlike their carnivorous counterparts.

Dogs have a better ability to process and synthesize amino acids and vitamins from their daily diet. Better yet, their bodies are able to create specific nutrients from these materials.

Whereas, most carnivores are unable to do the same thing and create nutrients in their body, heavily depending on their diet as a source.

For example, dogs have the ability to produce the amino acid taurine because of their enzymes. In contrast, cats do not have enzymes like these, so they have to consume amino acids from the meat in their daily diet.

Dogs also have the capacity to convert the fatty acids from plants to utilize them in their bodies. Most carnivores cannot do this.

Usually, the layout and formation of the teeth are a good indication of what types of food may be suitable for a specific animal.

Carnivores, for example, need to have sharp canines so they can rip meat apart. We all know that dogs have a sharp set of teeth at the front of their mouth for consuming meat.

However, they also have flat molars towards the back of their mouths that are able to crush plants before they are digested.

Being able to crush plants is vital during the digestive process as it enhances the number of nutrients absorbed.

What Should My Dog Eat?

Dogs may originate from carnivores, but they still have certain characteristics and traits that make them more opportunistic omnivores.

They have the ability to process a number of nutrients and fatty acids from plants. However, dogs still largely prefer meat ingredients compared to plants.

I know my pup does, and I know what she’d rather do if I gave her the choice between a carrot and a sausage!

What Is The Best Diet?

The best dog food for your furry friend will depend on them individually. Each dog is different and there are a number of things you need to consider.

However, the best types of dog foods are ones that use high-quality ingredients. For example, formulas that use whole fruits, vegetables, or whole grains.

Also, high-quality animal meat should be used as the main contributor to protein in the recipe.

Always be sure that whatever diet you choose for your dogs, provides enough nutrition for them.

If you’re ever unsure, consult your veterinarian so that you can formulate a plan together and avoid any possible nutritional deficiencies.

There are various types of grains that you’ll find in a number of dog food recipes. Examples include ingredients like rice, oats, and wheat.

Recently, there have been more grain-free dog foods on the market. In fact, as a dog owner, I felt rather guilty that my little Jack Russell was consuming a diet containing grains.

However, several grain-free diets may be linked to heart diseases like Dilated Cardiomyopathy, according to the FDA.

In addition, several dog owners have reported their pups suffering from allergies associated with wheat. But this is still extremely limited and grain sensitivity remains quite rare for dogs.

There are nutritional benefits to grains in dog food, mainly because of the starch that is found in them. This type of starch is relatively easy for dogs to digest. Just be cautious about which type of grain is in their food.

The best type of grains that you should look for is whole grains because they are a rich source of nutrients and minerals. Simply, dogs can eat grains safely, but be sure that they are formulated in a balanced meal with a wide range of ingredients.

And throughout their history, dogs have developed a unique digestive system that has allowed them to thrive with humans. This is despite the fact that they originate from wolves. So the occasion veggie snack is fine for them to eat!

In fact, there is a large variety of healthy human foods that they can enjoy with you too!

Speak to your veterinarian if you have any concerns or questions on dog nutrition and work together to develop a specific, personalized diet for your dog. 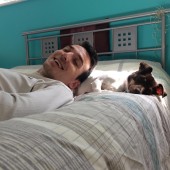 James started HonestWhiskers.com with a promise to provide the best quality information for you and your dog. He has partnered with veterinarians and pet nutritionists who are experts in their fields so that you can trust the advice you receive from them.

What Should I Name My Dog? Things To Know

How Long Does It Take For Worms To Leave A Dog?

Can Dogs Eat Fruit Snacks? What You Should Know About Dogs And Fruits

What You Need To Know As A Dog Walker

All articles are truthful and accurate to the best of our authors’ knowledge. No advice or opinion is intended to be a substitute for diagnosis, prescription, treatment, or advice from a veterinary medical professional. Animals exhibiting signs and symptoms of distress should be seen by a veterinarian immediately.